Download a PDF version of this newsletter here - please display on your work noticeboard.

EBA negotiations have been continuing at a very slow pace while HACSUs’ demand the Government come to an agreement to protect member’s ongoing wages and conditions in the event of privatisation. The Government has made no offers to secure an agreement on the issues which has significantly slowed the negotiation process. It is important that we remember that the union’s strength and power to secure an agreement comes from the front-line action members are taking every day. We must increase our everyday campaign action to build the pressure on Government to deliver us certainty for disability now!

Recent negotiations have also sought to address the Colanda closure, for more information on this, please see the attached page.

HACSU is demanding the ongoing protection of member’s wages, conditions and job security, we will continue to fight until the government guarantees us certainty in the face of privatisation.
If this agreement was just about wages and conditions it would have been settled a long time ago –This EBA is about our job security, our wages, and our conditions. HACSU will continue to fight on the ground until the government responds to our demands for these important protections.

In response to HACSU stop work action, the government has been forced to say in the media that ‘members’ working conditions will be protected under a transfer of services’. We have also heard the Minister Martin Foley say that all workers will be transferred under ‘fair terms’. We have demanded the government provide detail regarding how they define ‘fair terms’, as well as what conditions will be protected and for how long, the union has received no response on either matter.
This demonstrates the Government only wants to do the bare minimum, which is transfer workers on a new EBA that has minimal changes, a small wage increase and no commitment to protecting future job security.

If this were to occur we would be likely to see the following outcomes:

Clearly, HACSU will not come to an agreement while the government pursues this approach.

HACSU has been made aware of rumours that an agreement is close, unfortunately this is not true; we have not received any offers on any substantive issues. If you have any concerns or hear rumours, please call HACSU immediately on 1300 651 931 or email assist@hacsu.asn.au.

In the coming months HACSU is planning campaign blitzes in regional and metropolitan marginal seats as part of our political campaign to pressure the government and the rolling stoppages, public protests and bans will continue.

HACSU will not simply settle a new agreement which does not offer the protections we need at this important time in our union history. Members are reminded that any grounds we make in this campaign, come from the front like action members are taking at work. Apply the bans, talk to your colleagues and join in protected stop work action!

The Andrews Government knows that its rhetoric about fair terms transfer is nonsensical because at the very same time that the government is talking about a transfer on fair terms, no less than 45 NGO employers are wanting to cut workers conditions back from protections in expired EBA’s to the minimum award.  The NGO employers are pursuing these arrangements in preparation for the low NDIS unit pricing.

Yooralla is also in the process of trying to foist a disputed agreement on its staff that cuts personal leave for new employees and cuts shift allowance arrangements.

So the Victorian Government knows that its rhetoric about ‘fair terms’ is not sustainable.

To understand the difference in wages and conditions between DHHS services and NGO sector see the table below.

HACSU members at Colanda are continuing to build pressure on the Andrews’ Government through their sustained protected action campaign. Colanda members face dual uncertainty taking into account the closure of the centre as well as the threat of privatisation.

Members at Colanda deserve a comprehensive closure agreement that properly compensates members who move with residents to new group homes, of which the majority are being built away from the Colac Township, service continuity payments and better compensation for staff who are not redeployed.

The government is yet to offer Colanda members any incentive to pack up and move their lives to remain with DHHS services. Members are taking action by not cooperating with closure plans, increasing strikes across all shifts, including short strikes in the early hours of the morning to maximise inconvenience on management and campaigning in the community.

How you can take action now!

SPEAK TO THE FAMILIES OF THE RESIDENT’S YOU SUPPORT WHERE POSSIBLE!
ENCOURAGE THEM TO VISIT THE WEBSITE TO ALSO SIGN THE PETITION AND GET INVOLVED IN THE COMMUNITY CAMPAIGN AGAINST PRIVATISATION.

CONTACT YOUR LOCAL LABOR MP OR UPPER HOUSE MEMBER, WRITE A LETTER TO THE EDITOR OR CONTACT YOUR LOCAL RADIO TO DISCUSS THIS IMPORTANT ISSUE.
IF YOU NEED SOME ADVICE OR ASSISTANCE ON HOW TO DO THIS, YOU CAN CONTACT YOU HACSU ORGANISER BY CALLING 1300 651 931 OR  DOWNLOAD THE CAMPAIGNING KIT!

APPLY THE BANS, MAINTAIN THE ACTION AND DEMAND CERTAINTY NOW! 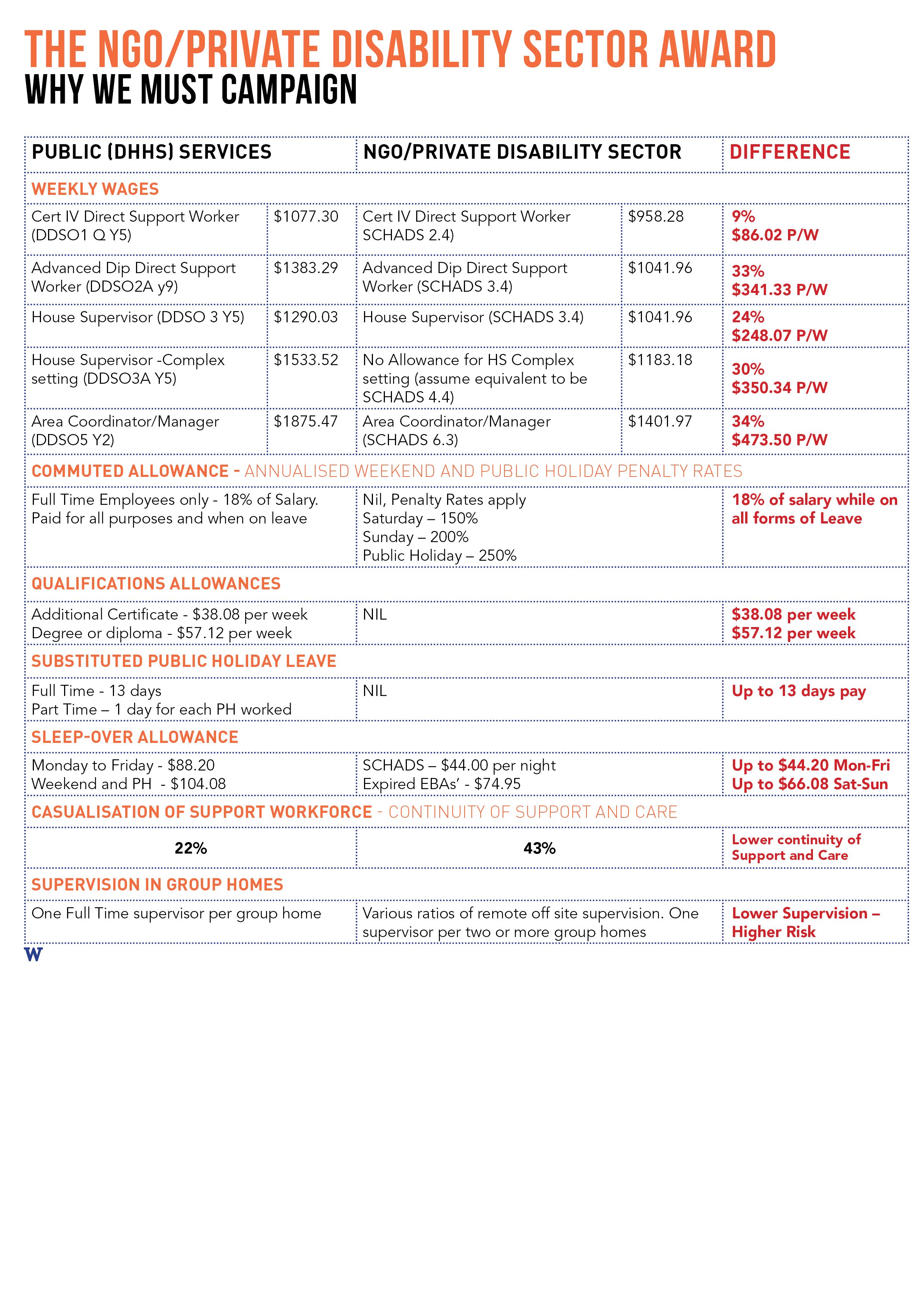