DHHS Disability members have been taking the fight up to Andrews Government to protect our job security, working conditions and quality services in the face of Labor’s plans to privatise public disability services.

Member’s action has been hitting news headlines over recent weeks with a range of stop work activity and community protests getting high profile news coverage. The efforts from all participating HACSU members has been instrumental in building our position in the campaign.

The DHHS EBA negotiations have taken a step forward, after what has been slow and poor responses from the Government/DHHS. The recent campaign activity has resulted in the Government bringing in more senior officials from Industrial Relations Victoria (IRV) to advance the negotiations. IRV is the government agency responsible for overseeing and assisting in resolving more complex disputes in the public sector. After a period of no progress, the negotiations are now beginning to focus on broader job security, conditions and protection claims, however, we still have a long way to go.

Because this EBA is being negotiated under the dark cloud of privatisation, our claims go well beyond the normal claims for an immediate wage increase and improvements to conditions. Our demands include looking into the unknown and developing protections for future job security, working conditions, supervision and career structures in the event that the government seeks to ram through its privatisation plans.

HACSU has now tabled detailed clauses covering the majority of those claims, note we are still to table our major claims including, wages, education, classifications, and a few others. We are fighting for the certainty of our job security, our wages and conditions; certainty for all workers and residents in public disability services!

Members’ participation and commitment to our campaign is steadily increasing the pressure on the government; however, we know that due to the complexity of the issues, it will be a longer campaign than we have experienced in the past.

Keep up the great work; keep those bans in place and participate in the stoppages and protests as they occur!

Hundreds of HACSU members, supported by other unions and community members march on Parliament house.

On the 10 May over 400 HACSU members, supported by other Victorian unions took to the streets of Melbourne to march on Parliament House.  Participation was fuelled by the importance of this EBA and member anger over the Government's latest announcement to commence the first stage of the formal privatisation process - the ‘Expression of Interest Phase’.

The rally was an important step in the campaign for certainty. No EBA is won on negotiations alone, members must take action and participate in stop work action to build pressure on the government and DHHS management.

At Parliament, the rally heard from HACSU member Karena McClurg, parent of DHHS resident Barry Fitton and Greens MP Colleen Hartland who is a former disability support worker. The rally sent a strong message to the Government, we demand certainty now! The event was covered in both the print and TV news media, ensuring the campaign was brought to the attention of hundreds of thousands of Victorians.

Shortly after the HACSU rally on Parliament, members turned out at the ALP State Conference to support families in a call for the choice to remain with DHHS services. HACSU members stood with families as they held a press conference to tell their real-life stories of what privatisation means for families. They spoke of their fears, their support of staff and the importance of our supervision structures, and how experienced, well trained and stable staffing delivers quality outcomes for their daughters, sons and siblings.

Inside the ALP conference State Secretary Lloyd Williams and parent Phil Lipshut delivered passionate speeches supporting an urgency resolution that called on the government to abandon its privatisation plans and to give families the real choice to remain in public sector services. In a shock to the government, Disability Minister, Martin Foley, was howled down by delegates, who unanimously voted up the urgency resolution.

Significantly, the conference highlighted the fact that the Labor Government and the Labor Party members are now divided over the privatisation of Victorian public disability services. The events inside and outside the conference were covered by the TV stations and the Age and Herald Sun newspapers.

On Wednesday 31 May HACSU and a delegation of seven parents met with Daniel Andrews to tell him directly about their shared concerns about privatisation. The meeting was requested by HACSU in the lead up to the ALP State Conference event.

Parents outlined their deep concerns and opposition to the privatisation of DHHS disability services; they asked the Premier to not to proceed with the EOI process and to give them the choice to stay with government services. The parents strongly articulated their support for DHHS staff, the work they do in delivering quality services to their loved ones and the importance of the superior supervision structures, staffing levels, qualifications and stability of DHHS services.

Unfortunately, the Premier did not commit to giving residents the choice to remain with public services, however, he has committed to further meetings and HACSU is working with parents to ensure it occurs.

We congratulate all the members for their support of parents and families, our share the same goals – Certainty for Quality Disability Services.

Adding to the Rallies and ALP conference activities another round of automated campaign calls saw over 250 union members and family members ring either the Premier Daniel Andrews or local MPs in marginal seats to express their disgust over the plans to privatise public disability services.

A range of other events are planned in the coming weeks, including a stop-work in the Barwon Region on the 6th June, a National NDIS workforce policy reform event between unions and Federal Labor in Canberra on the 16th of June and another stop-work in Gippsland on June 22.

HACSU is also planning the next phase of the marginal seats campaign against the Labor State Government.

Members are asked to keep their eyes out for local campaign activities in their region, maintain pressure on local Labor MPs, and ring talk-back radio when these issues are raised.

Keep following HACSU on social media, stay up to date with events and information. Make sure you are subscribed to HACSU emails. If you have issues with this, please visit www.hacsu.asn.au

HACSU members at Colanda in Colac have stepped up their campaign activities. In addition to the EBA and privatisation concerns share by all, Colanda members are confronted by the centre’s closure.  The government has announced that the majority of the replacement group homes will build in Geelong, Warrnambool and Ballarat; meaning that workers will need to be redeployed outside of their home community creating major upheaval for members and their families.

This will result in profound change for those workers and their families, and will have a major impact on the Colac community. HACSU has demanded a major package of compensation and incentives to ensure that experienced staff can choose to move with residents to new locations, providing continuity or care for residents and fair compensation for staff.

Recently the DHHS in major act of bad faith, rejected almost every component of compensation and every incentive for staff proposed by HACSU; this resulted in members escalating their campaign by completely withdrawing their participation in the closure process and increasing their stoppages across the shifts at Colanda.

Members’ decisive action has forced the government back to the table and negotiations towards a settlement of an agreement that addresses our demands is steadily progressing.

Congratulations to Colanda members for their efforts and solidarity in keeping up the Certainty for Colanda fight.

Colac DAS members’ have initiated the local ‘Coffees for Certainty ‘campaign; bringing members together to support and discuss the Certainty for Disability EBA and privatisation campaigns. Members meet at the local coffee shop, all wearing the HACSU colours to share stories with the local community. The weekly "Colac Coffees for Certainty", coordinated by local delegate Cathy Kanizay, aims to keep members and the community up-to-date with the latest news and ensure there is a support network in place in Colac.

Lloyd Williams praised the "Colac Coffees for Certainty" as a fantastic solidarity initiative. All members are encouraged to take up similar events and are reminded that we currently have a competition for best decorated workplace and best costume for the EBA campaign. Get creative! 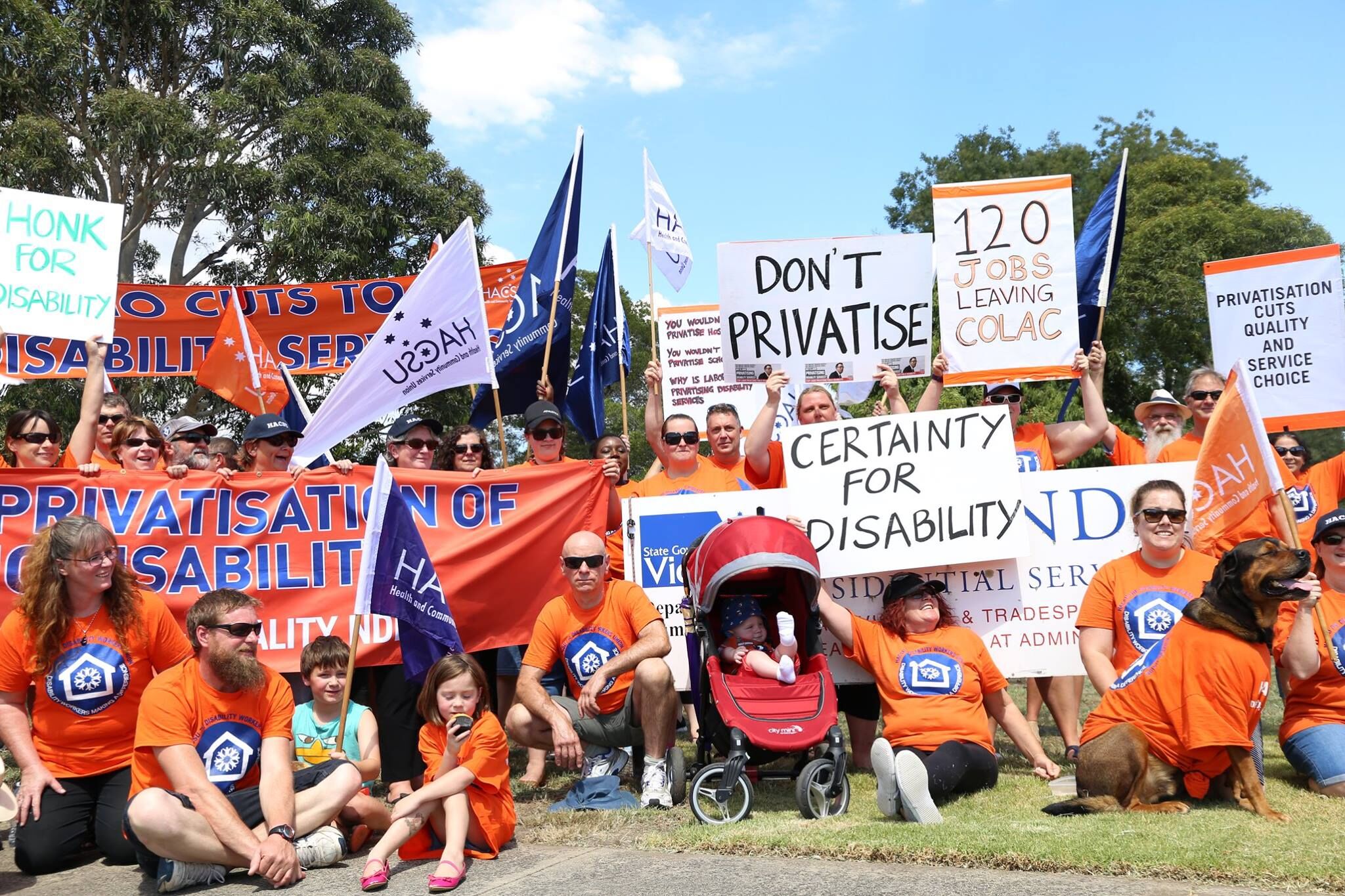 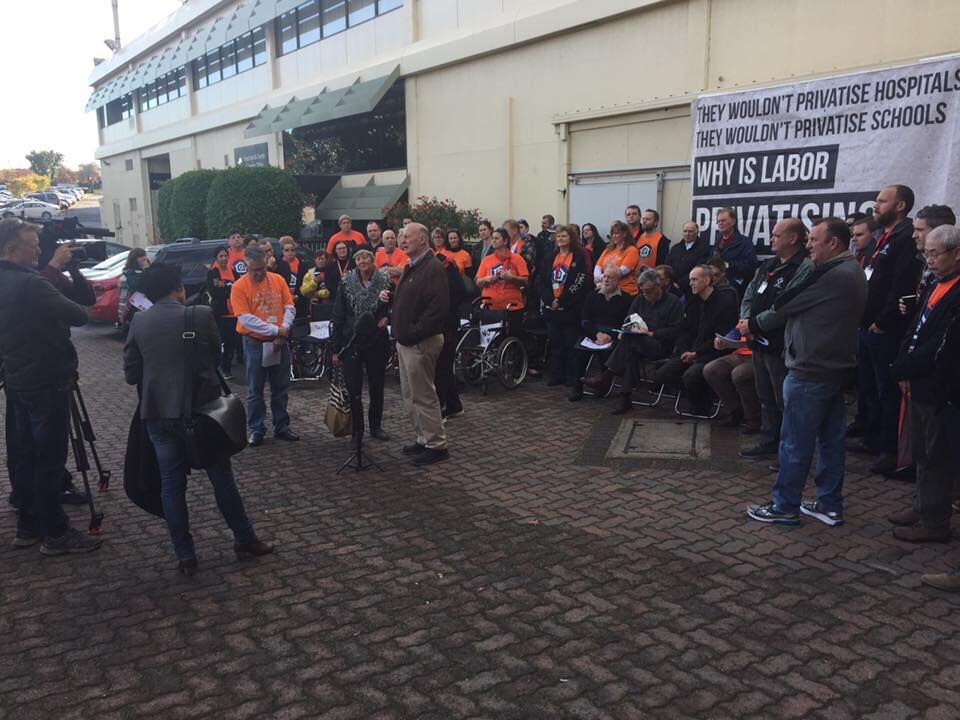 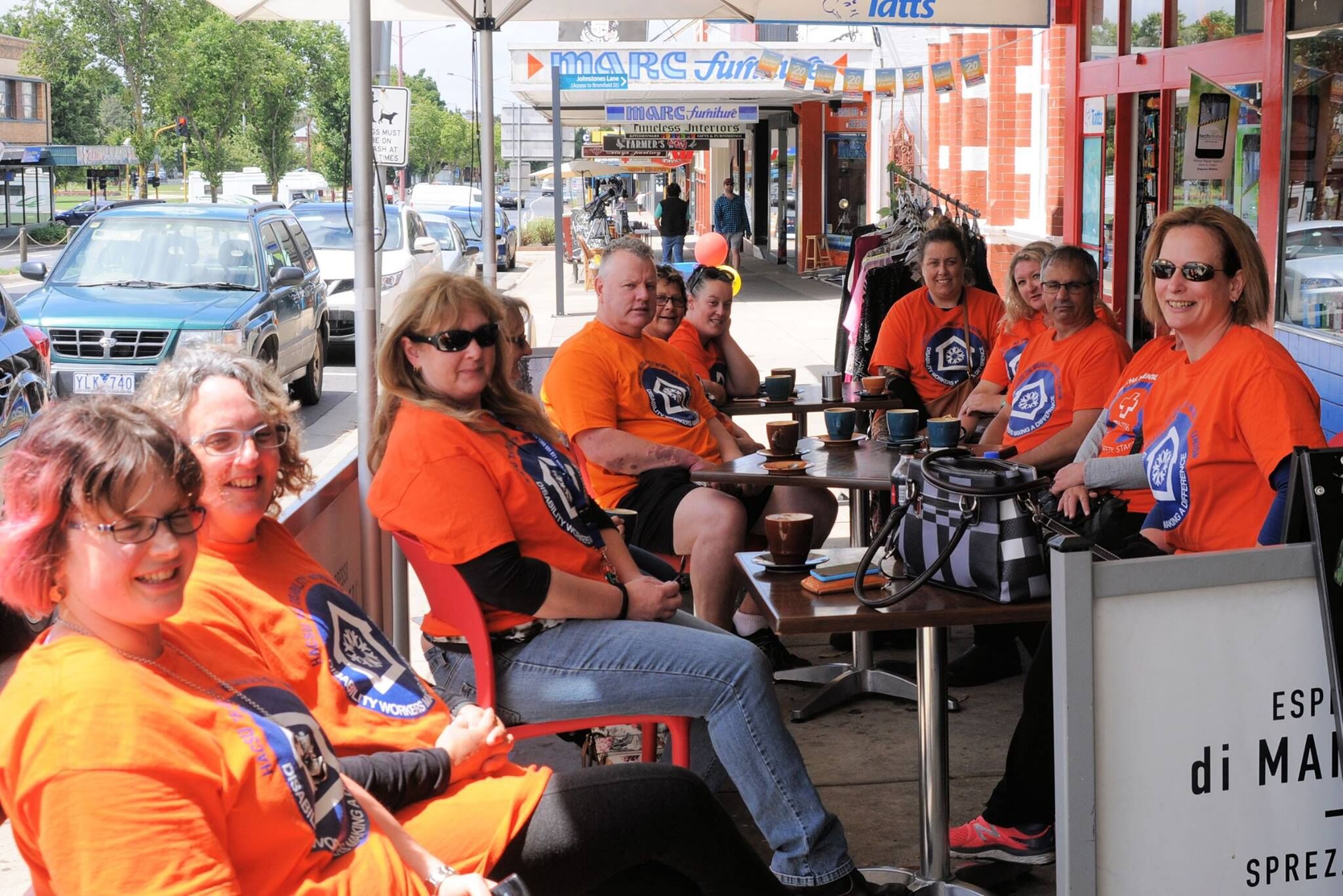 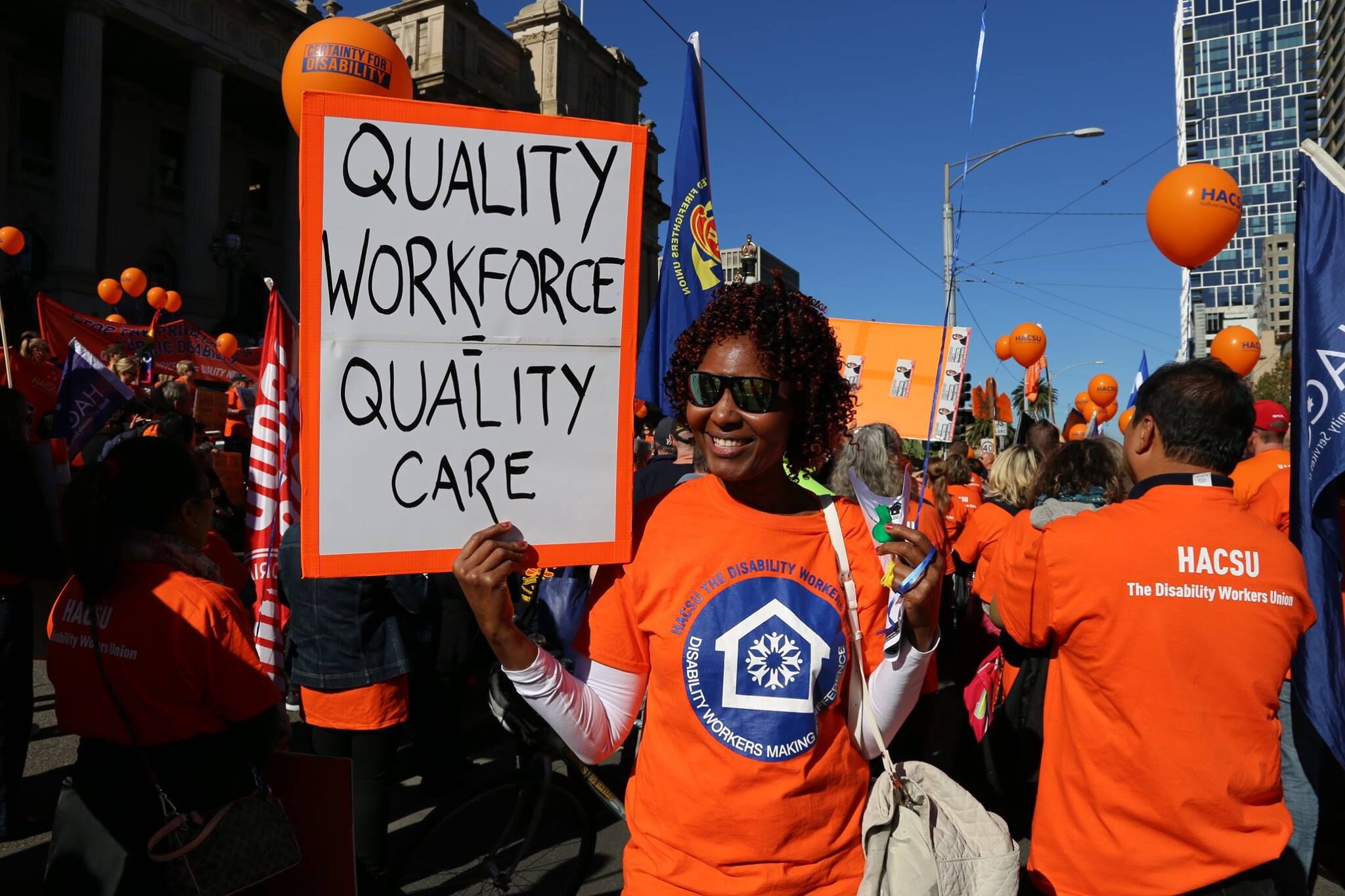 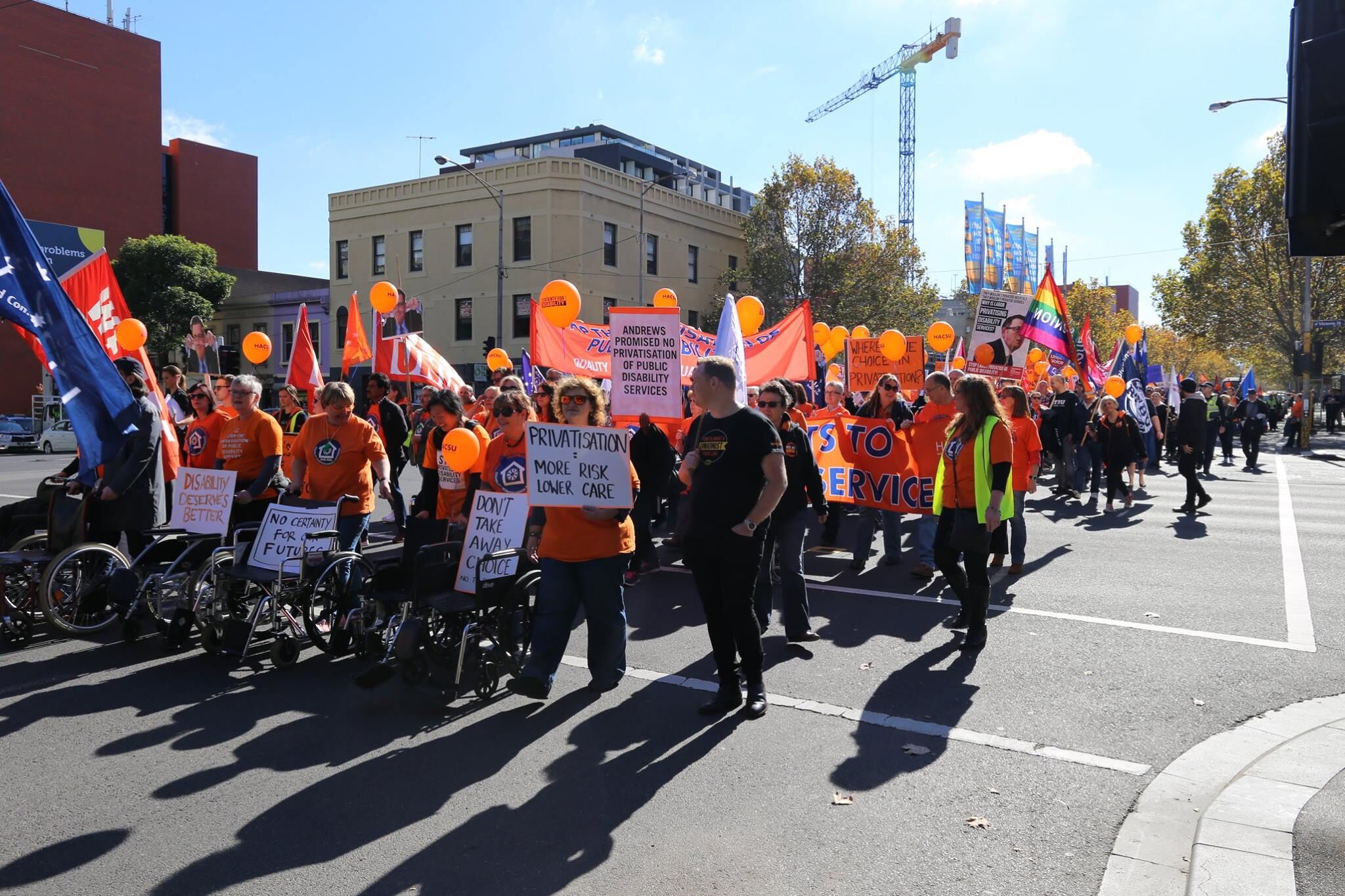 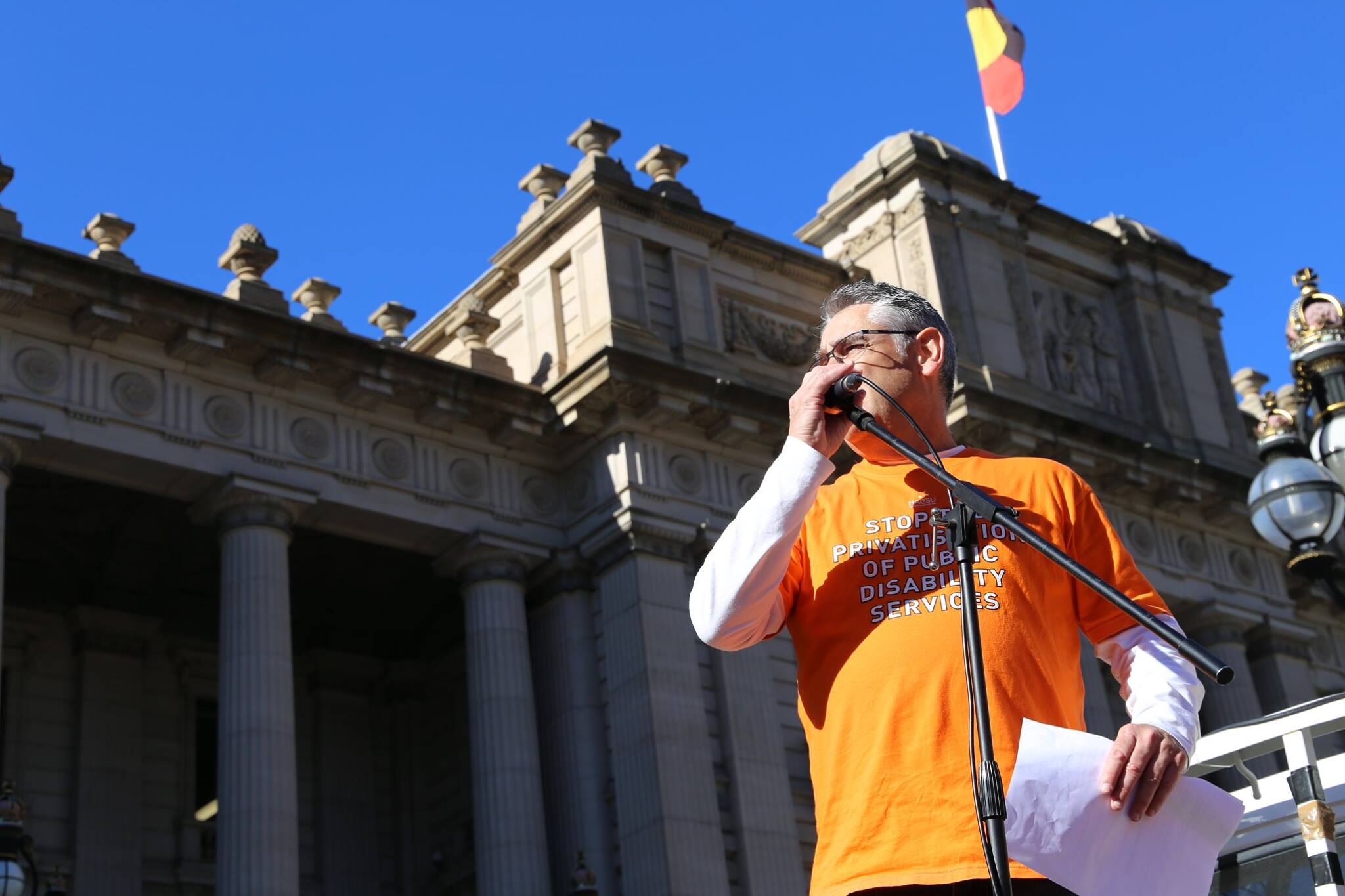