Home >News >Organising my workplace during an EBA campaign

Organising my workplace during an EBA campaign

We know some members are excited about the EBA campaign, seeing it as a great opportunity to stick it to the boss. Some members feel worried about the campaign and the impact it may have. Know that we’re in this together. The only way we can achieve the best wages and conditions is by organising our workplaces and taking action.

What does it mean to have an organised workplace?

It doesn’t mean there’s matching stationary and a tidy filing system (although that sounds very nice); an organised workplace means all your colleagues are union members. It means that we’re all together when we attend a stop work; everyone is wearing their campaign colours on shift; everyone attends the next union meeting. It shows the bosses that this is your workplace – and your EBA.

So what can you do to organise your workplace?

Even if maths isn’t your strongest skill, here’s some simple arithmetic that anyone can follow: more HACSU members = more power at the bargaining table = a better EBA.

The union is only as strong its members. This is most evident during bargaining negotiations; nothing scares the hospital senior management like seeing our numbers grow. If you know of a colleague who is a member of another union, or worse – not a member of any union, make sure you have a conversation about the benefits of high union membership during an EBA campaign.

EBA campaigns can be confusing. There are lots of questions and issues. Here are just a few that we’re often asked:

What’s the difference between a delegate and organiser? A delegate is colleague who represents HACSU at your workplace. An organiser is directly employed by HACSU to help workplaces get organisEd.

What is protected action or industrial bans? These are essentially the health industry’s version of strikes. Because we work with vulnerable people, we can’t ethically drop everything and strike. Instead, we get clever and take other action like stopping certain types of paperwork or wearing campaign colours at work. These actions give us more leverage at the bargaining table.

Who are the VHIA? The Victorian Hospitals’ Industrial Association are the elected representative body for hospitals; just like a union for your employers. The VHIA will bargain on behalf of the hospitals.

Sometimes the EBA campaign can feel like the lowest priority on your list. It means going to a union meeting when you’re buried in paperwork or losing an hour of pay for attending a stop work. However, it’s also the best way to get a better deal for your EBA.

There are also lots of easy little actions you can take during a campaign that have an enormous impact; even simple things like posting the latest newsletter on your workplace noticeboard.

Help will always be given at HACSU to those who ask for it.

If you need help getting you workplace organised, your HACSU organiser can visit your workplace to give you a hand; all you have to do is ask.

Written by Will, Organiser.

Sharing is caring. Print this newsletter to post on your workplace noticeboard. 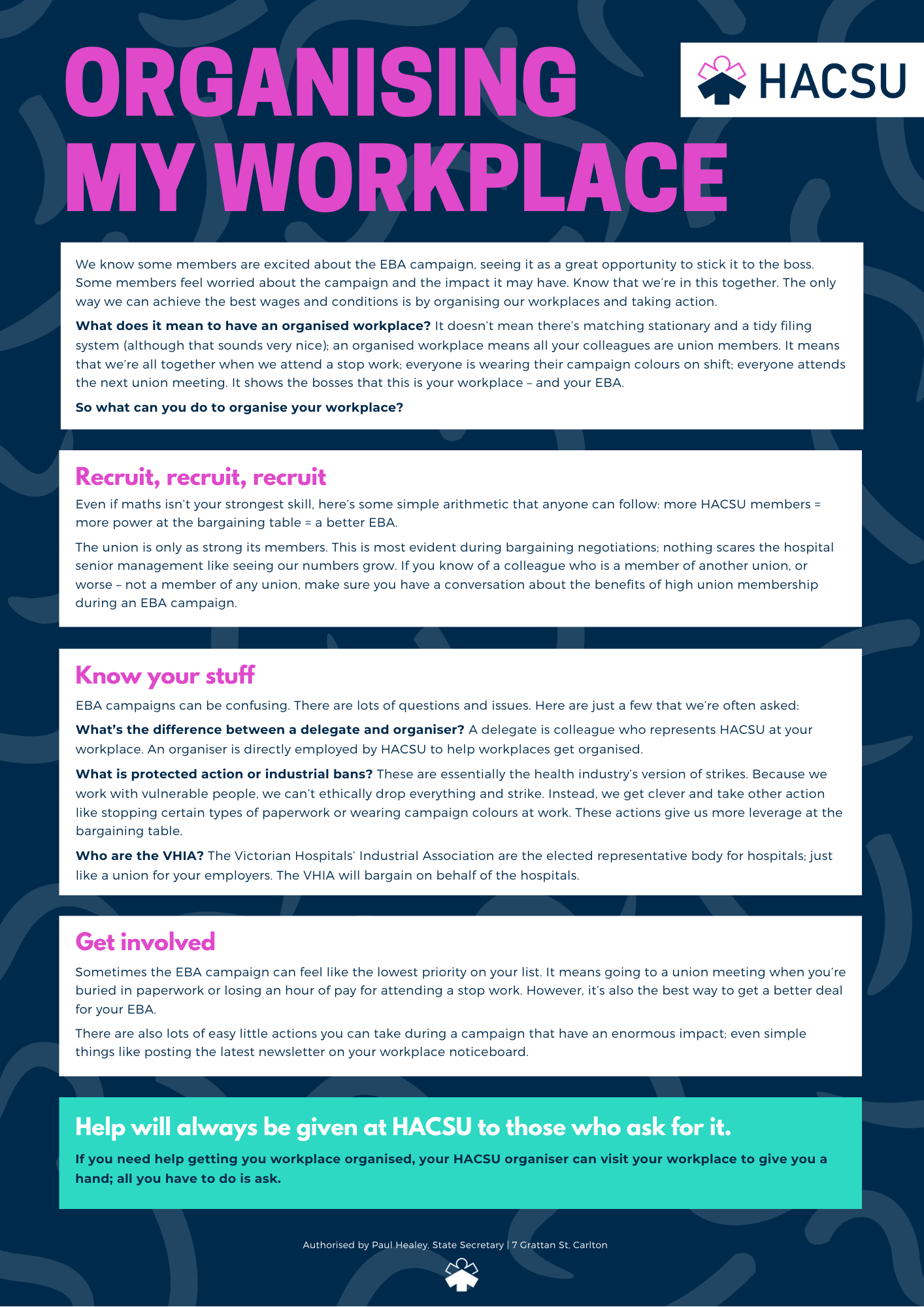